The Voiceover Artist: A Novel

Praise for The Voiceover Artist, which is available now from Curbside Splendor Publishing and distributed by Consortium: 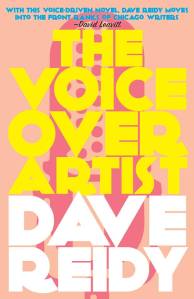 The 2016 Tournament of Books Long List – The Morning News

” . . . a compassionate and earnest read.”—Publishers Weekly

“Reidy’s portrayal of Simon’s anxieties and insecurities, both throughout his years of silence and later in his bid to be heard, is moving and honest. The love-hate relationship between Simon and Connor is a stirring depiction of a troubled sibling bond, while the unique insider’s look at the voiceover world is informative and entertaining.”— Booklist

“The narrative unfolds via different voices, with that of talent agent Elaine Vasner particularly memorable. Reidy smartly takes us just up to Simon’s first, not wholly unalloyed, triumph, paralleled by bittersweet family moments. VERDICT An appealing portrait of one individual’s struggle.”—Library Journal

“The reader is brought in close to the emotional turmoil of the story . . . the joy that Simon feels when he gets his first voiceover job, and the peace he feels when he realizes that a real voiceover artist is one who creates characters from scripts — who brings humanity into the recording. Reidy’s novel does something similar. His focus on character and voice draws readers in, and, in plain language, forces them to confront the communication problems present in their own families.”—Allison Pinkerton in Necessary Fiction

“Dave Reidy’s debut novel The Voiceover Artist is as moving a book as I have read all year, the remarkable story of a young man literally finding his voice.”—David Gutowski of Largehearted Boy

“Reidy is at his best when focusing on Simon and Connor’s relationship, a uniquely complex, sometimes uncanny sibling rivalry and a skillful portrait of two young men with unironically big dreams.”—Janet Potter in the Chicago Reader

” . . . [A] touching debut by author Dave Reidy brings to life Chicago’s little-explored entertainment scene in a wonderful story of brotherhood, forgiveness and growing up. The Voiceover Artist is both an emotional family drama and a graceful coming-of-age metamorphosis, centered on the universal toils of finding one’s true voice. . . . Told with smart prose, The Voiceover Artist is a beguiling tale of personal transformation and perseverance through common human struggles.”—Jenni Herrick in The Shepherd Express (WI)

“This is a compassionate, quirky, ambitious novel about embracing your identity and pursuing your dreams.”—The Hutchinson News (KS)

“The Voiceover Artist connects a community of disparate Chicagoans—rising stars and fading elderly, drunks and dreamers, performers and mutes—who yearn to find their voices and prove their value to the world. In a chain of intimate, first-person narratives, each character takes a turn at the microphone, confessing to the reader the secrets that separate them from the people they love. The Voiceover Artist is a compelling and unforgettable exploration of the power of the human voice and the human heart.”
—Valerie Laken, author of Dream House (Harper) and Separate Kingdoms (Harper Perennial)

“With this voice-driven (literally) novel about a young man (literally) finding his voice, Dave Reidy moves into the front ranks of Chicago writers, Catholic writers, writers about stuttering, and writers about sibling rivalry: a list that will give you some idea of his range and literary ranginess. The Voiceover Artist is winning, smart, and generous.”
—David Leavitt, two-time PEN/Faulkner Award finalist and author, most recently, of The Two Hotel Francforts: A Novel (Bloomsbury)

“I often wonder what happens in a person’s life to change him from a boy to a man. But brothers don’t change from a brother into something else. They remain brothers. As a man, being and having a brother might start to feel claustrophobic. No way out. Dave Reidy’s The Voiceover Artist examines this from every angle. This novel is brotherhood, is boyhood, is manhood. How poignant that these characters are searching for their voices while attempting to use these voices to make a living. There is family, life, raw realness to be found in their father’s stutter, in their jealousy and love for each other, in every word of Reidy’s book.”
—Lindsay Hunter, author of the novel Ugly Girls (Farrar, Straus and Giroux) and the story collections Don’t Kiss Me (FSG Originals) and Daddy’s (featherproof)

“The Voiceover Artist is tender and beguiling. It is a wonderful story, told with artful directness about family, faith, forgiveness and the large human struggle we all face to find our true voice.”
—Scott Turow, author of ten best-selling works of fiction, including Presumed Innocent and Identical

“My first thought picking this book up was what if Binx Bolling [of Walker Percy’s The Moviegoer] were really Catholic and winds up not glib in New Orleans but stuttering in Chicago? This is a completely errant, if not arrant, idea. The Voiceover Artist is a broad, ambitious, multifaceted, exacting set of portraits of some very twisted folk. They are their own analysts, viciously jockeying to win. Mr. Reidy can be frightening.”
—Padgett Powell, Whiting Award winner and author of six novels, including You & Me (Ecco)

“Woven into the middle of this captivating story is the most accurate depiction of the Chicago improv world that I’ve ever read. When you open The Voiceover Artist, you can smell the stale beer and hear the clever quips.”
—Keegan-Michael Key, co-creator and co-star of the Peabody Award-winning Comedy Central series Key & Peele

Praise for Captive Audience, which is available now from Ig Publishing (Brooklyn, NY) and distributed by Consortium:

“. . . a detailed and seemingly experience-based portrait of what it’s like to strut one’s stuff onstage–be it at a comedy club or on a basketball court–for all to see and judge. . . . an impressively solid debut . . . .”
—Chicago Sun-Times

“Dave Reidy’s 2009 collection Captive Audience left us impressed with its take on comedy and its impressive emotional range.”—Vol. 1 Brooklyn

“. . . a highly promising and playful debut. Captive Audience . . . certainly establishes Mr. Reidy as a talent to watch with interest.”
—David Sheffieck, The Front Table, from the Seminary Co-op Bookstores

“In Captive Audience, Dave Reidy collects fictional stories of performers on the fringes of the entertainment world and deftly mixes in cameos from real celebrities (from R.E.M. to Abe Vigoda). This heartfelt collection highlights Reidy’s empathy for his characters, and portends a bright future for the author.”
—David Gutowski of Largehearted Boy

“Dave Reidy’s stories remind us that even when we’re composing our Song of Everyone Else, we’re creating a distinctive Song of Ourselves, and continually gathering others into us, in a way that Walt Whitman would recognize, and celebrate.”
—Jim Shepard, winner of the Story Prize for the collection Like You’d Understand, Anyway